I’m going to take a quick break from the costume and CASA to share something awesome.

Yesterday, Chris Pratt, the actor behind Star-Lord, asked his Facebook fans to create a new cover photo for his page. I’m not sure he knew exactly what he was getting himself into, but his wall quickly exploded with Photoshop awesomeness. Here’s his guidance:

Hello friends and fans. I am in the market for a new header for my FB page. I want to do a contest. Whoever replies with the best header (make sure your signature is big enough to be seen) will have the honor of it being my official header.

I don’t know photo shop. But you do and this could be a great way for me to notice you and give you accolades plus maybe a free dinner at applebees or something like that who knows sky’s the limit.

so. i need a header. which looks like it would be 1 tall x 3.5 wide.
I’m looking to have Peter Quill, Owen, Andy and Emmet in the mix. possibly some other fun stuff including but not limited to previous roles, my family, eagles, american flags, guns, cool ford raptors, cigars, explosions, anything sly stallone, bloodsport, early steven segal, anything that looks bad ass and will say, “Hey this facebookprofile is chris’s and this is what he’s all about.” maybe some raptors, or even some largemouth bass or deer or trophy elk, maybe some cool guns or rollerblades or possibly even a nascar or a steak maybe even some corndogs. don’t ask me! you decide!

so yeah. who’s gonna get me the best one and have their name displayed for millions of people to see?

Here are some of my favorites:

Created by Aisling O’Hagan-Gamble. I love how it all blends together. Kind of reminds me of Firefly.

Created by Ramel Ureña. Love the raptors. I’m not sure how he did a Lego raptor…but it’s seriously awesome.

Kode Abdo created an awesome original background. Love that he’s riding a raptor holding a beer. Only Chris Pratt could do that without spilling the whole thing.

If you can’t Photoshop, Lego. Motto to live by. Here’s one by Cody Ogrentz.

Ginger Clark went in a completely different direction because…why not? I admire the originality. 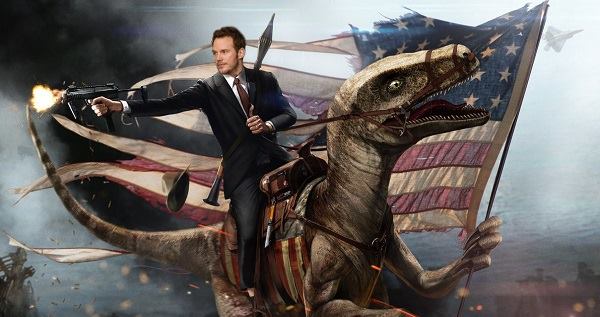 This one submitted by Mitchell Cotton. ‘Merica.

I love this one created by Brandi Kenney. She writes “Dear Mr. Pratt, I’m sure you’ve probably wondered: “What would happen if Peter Quill and Owen Grady’s raptors formed a band?” Well, I’m here to tell you that you don’t have to wonder anymore. Here is the cover album artwork for a record I like to think would have been heavily influenced by the Jackson 5″ Check out her Facebook page: Brandi Kenney – Design.

I call this one the Chris Pratt “James Bond” Header. Created by Monica Price.

Ryan Adams submitted this gem. I have no words. Chris Pratt did. He said, “this might be the one!!!”

If there’s one thing Chris Pratt gets besides acting and raptor taming, it’s social media.

Which one is your favorite? Is there another one you would like to see added to the list? Let me know!

As always, if you enjoy the blog, feel free to subscribe and support me by donating to CASA. Link on the right! –>